As a youth I became withdrawn and somber when my father passed.  So my mother decided to send me to spend the summer with my grandparents.  My grandparents greeted me at the train station with smiles, hugs and kind words and a puppy named Buddy.   All of which lifted my spirits.  A big gentle man, Grandpa was always smiling as he told stories of his times and travels.  Grandma was happy always as she prepared dinners, baked cookies and pies.   It was this time that healed a young boy’s spirit.

At breakfast one morning while reading the paper, Grandpa said the circus was coming to town and he would take me that Saturday.  Saturday morning arrived and we drove Grandpa’s pickup to town and past until in the distance you could see the tents of the circus.   Grandpa took us to the Big Top Show with elephants, clowns and all.  After, as we were leaving, I saw a big picture on a tent of the Circus Strongman and I asked Grandpa could we go in and he said yes.  Grandpa bought tickets and as we entered a big man, bigger than Grandpa entered flexing his chest and arms.  During the show the Strongman lifted heavy objects with one arm and two arms and his back.  I was so impressed, I told Grandpa I wanted to be strong like him.  I asked Grandpa how did the Strongman do that and Grandpa said let’s go ask.  Grandpa then went to the man that sold tickets paid him something and said, “Let’s go ask Grandson.” We were taken behind the stage where the Strongman was sitting at a small table with a little girl my age mixing something in a bowl which he then poured into a cup of liquid, mixed the potion and drank it saying it makes me Stronger!  Grandpa shook his hand and told the strong man what I had said.  The Strongman then walked to me with a smile on his face, picked me up with one arm, placing me on his shoulder saying, “So you want to be strong like me?”  At that time the little girl came running to him saying “Daddy!”  He kissed her and picked her up placing her on his other shoulder turned and looked at my Grandfather smiling and said, “I love the children.” He then put us down saying go and be friends we men must talk.

On the ride home Grandpa said the Strongman had agreed that this week the Circus was in town that I could go watch him train early each morning if I wanted, and I said yes!  He told me that he and the Strongman had agreed that payment for this would be one of Grandma’s apple pies each day.  And so it was, Grandpa would take me each morning, apple pie in hand and I would watch the Strongman train for hours.  Each time, before mixing something in a bowl pouring it into a cup, mixing it and drinking the potion and saying it makes me Stronger! 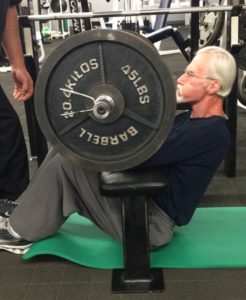